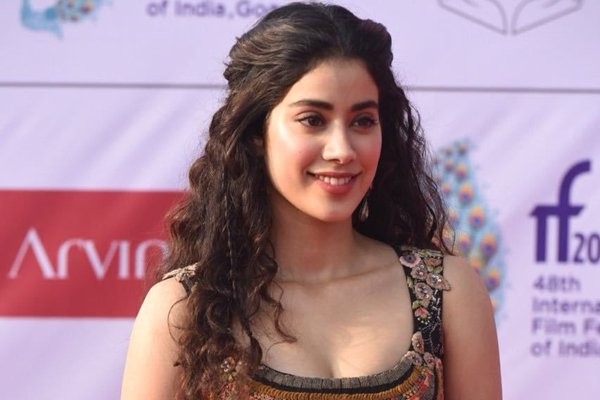 Janhvi Kapoor is on the cloud nine as her debut film Dhadak did a good business at the box office. Before heading for a next project, she is on the holiday time with her sister Khushi Kapoor and Amitabh Bachchan’s granddaughter Navya Naveli Nanda. The girl gang is currently in the US to spend some fun time with each other.

The Kapoor sisters were last seen at the Lakme Fashion Week 2018 together and after that they off for a vacation to New York. Khushi and Janhvi were joined by Amitabh Bachchan’s granddaughter who swoon everyone at the launch event of her mother, Shweta Bachchan’s clothing line in the city.

The girl gang has been sharing pictures and videos from their NYC holiday on the social media platforms and their fans can’t stop gushing on them. In a picture, the Kapoor sisters Khushi and Janhvi are looking absolutely beautiful and are carefree girls. Also, a video is surfacing on the internet showing Janhvi along with Navya Naveli Nanda having food with a bunch of other friends.

On the professional front, Janhvi Kapoor will next be seen in Dharma Production’s most awaited project Takht. The film will be directed by her mentor Karan Johar and it will be a multi-starrer film which also stars, Ranveer Singh, Alia Bhatt, Vicky Kaushal and Kareena Kapoor Khan. It will definitely be a great opportunity for Janhvi to work with big stars.

Also, Janhvi is quite active on social media and recently she shared her brother Arjun kapoor’s first look from his upcoming film India’s Most Wanted with caption written as: “Where did your chill go????” To which Arjun Kapoor replied: “That’s my look when I realise you went to New York and straight ran to workout instead of six flags!!!”

Check out the list of best dressed beauties of the week:...