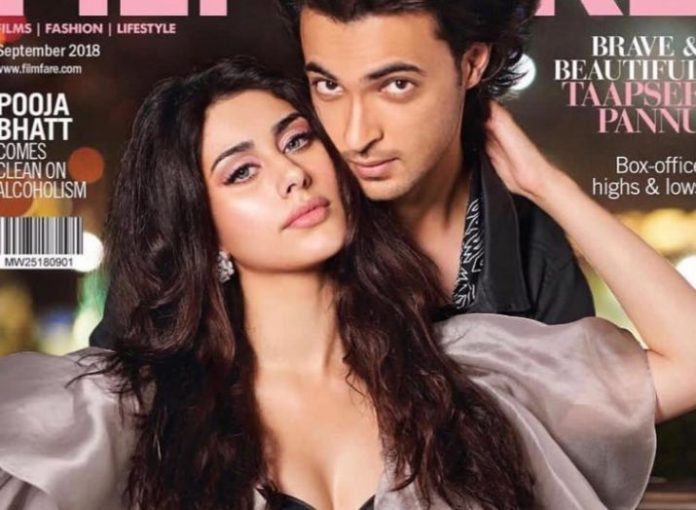 Salman Khan’s forthcoming super treat for his loving buffs Loveratri has already become the talk of the town.

Not only the biggies from the film industry but the viewers can’t stop discussing about this new pair- Aayush Sharma and Warina Hussain.

After making the hearts beat faster with their promo and mesmerizing numbers, Aayush Sharma and Warina Hussain is all set to sizzle on their first mag cover.

The two new comers got featured on the main page of Filmfare magazine and they look damn cute.

You can’t stop yourself from praising them as they are looking dashing together.

The pair is oozing hotness on Filmfare magazine and is guaranteeing that each and everyone will fall in love with their interpersonal chemistry.

Aayush shared the cover on his personal Insta handle and captioned it as “My first cover ever, it’s extremely special to me.”

At this time, Aayush and Warina are busy in promotions of their debut movie in each and every corner of the nation.

Aayush and Warina are travelling to diverse cities and getting love from their buzz through their dance performances. In recent times, they also rolled out the song ‘Tera Hua’ from the film.

While discussing about working in his first flick after being an assistant director, Aayush said in an interview with media people, “Initially, it was a little weird, because as an assistant [director], I was always behind the camera. I’ve always seen other actors perform, and when it was my chance, I was like, ‘Okay, I have to do this. But how do I take it and how do I do this scene?’”

The movie is a musical romantic drama produced under the banner of Salman Khan Films and helmed by debutante Abhiraj Minawala.

The flick will hit theaters on October 5.